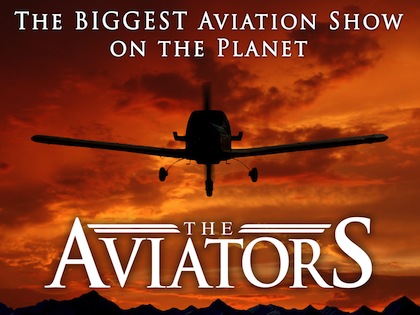 The Aviators is an award-winning weekly TV series featuring interesting people, the latest aircraft, the coolest technology and the best fly-in destinations. It’s action, intensity, and adrenalin mixed with education, entertainment, and beauty. The Aviators is for everyone who has ever gazed skyward.

The Aviators airs on broadcast television with a weekly US audience of over 9.3 million in almost 3.6 million TV households as reported by Nielsen during the show’s second season. In the United States, The Aviators has aired on over 86% of PBS stations across the country – numbers equaling PBS’ best network programs.

The series airs in Canada on CHEK on Bell TV and Shaw and is also an incredible international hit already airing in over 100 countries mainly on Discovery Channel. 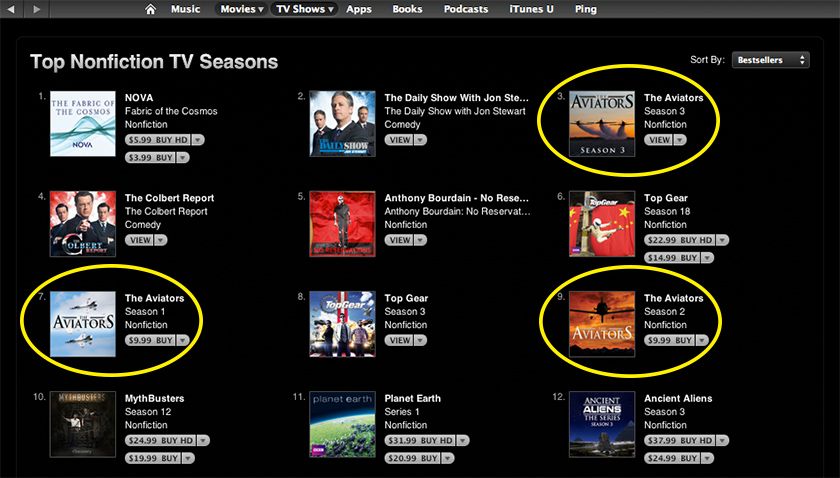 3 Seasons of The Aviators in the iTunes Top 10

The first two seasons of The Aviators held positions in iTunes’ top 50 Non-Fiction TV Series right up to the premiere of season three on September 18th, 2012. The first episode of the third season skyrocketed up the charts eventually landing on the #3 position on the day of it’s release, immediately behind The Daily Show with Jon Stewart and ahead of titles like Top Gear, The Colbert Report, Anthony Bourdain: No Reservations, and Mythbusters. This meteoric rise carried with it seasons one and two which finished the day in positions #7 and #9 respectively, resulting in all three seasons of The Aviators ranked in the top 10 at the same time.

Season 3 also broke the Top 50 chart of OVERALL television series’, ranking #46, in company with shows like Breaking Bad, Mad Men, The Office, Boardwalk Empire, Modern Family, and The Simpsons. Within just one week of the free-download release of the first episode of season 3 on iTunes it became the top All-Time Bestseller among free TV episodes. Season 4 rose to #2 on the iTunes charts within hours of its release and maintained a chart position for months. Season 5 reached the #4 position and Air Boss topped the charts becoming our first #1 hit!

If The Aviators is not showing in your area, contacting your local PBS station directly has so far proven to be very effective in influencing station program directors to air the show. But with over 80% coverage on PBS you might simply have missed airings in your area. Online program schedules can be inaccurate with respect to independent productions such as ours, so not seeing The Aviators on your station’s listings may not necessarily mean the show isn’t being aired.

In the meantime, you can always watch full episodes online in our Members Area or even purchase the DVD or BD set of each complete season. Of course we’re also available on iTunes, Google Play, Vudu and Amazon! So there’s plenty of ways to make sure you get your fill of The Aviators!

7ads6x98y
Save big on bundles! Get your DVDs & Blu-rays of EVERY season!Shop for Bundles Now!